Get imaginative with popular children’s author and illustrator Ross Montgomery. He’s joining us on Library Adventures Live! for a special event based on his fabulous new book The Midnight Guardians. As well as reading from his books, he’ll be entertaining us with fascinating facts and plenty of jokes. We might even be able to persuade him to do some drawing for us. If you’ve any questions about being an author/illustrator or any suggestions for things you’d like to see Ross drawing, send them in advance to lal@kirklees.gov.uk

About The Midnight Guardians 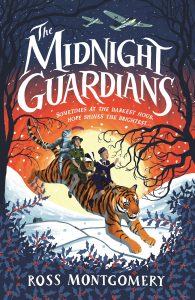 Sometimes at the darkest hour,
Hope shines the brightest…

When Col’s childhood imaginary friends come to life, he discovers a world where myths and legends are real. Accompanied by his guardians – a six-foot tiger, a badger in a waistcoat and a miniature knight – Col must travel to Blitz-bombed London to save his sister.
But there are darker forces at work, even than the Nazi bombings. Soon Col is pursued by the terrifying Midwinter King, who is determined to bring an eternal darkness down over everything…

“Spectacular. A story of real and rare power – one of the best books I’ve read in years.” Kiran Millwood Hargrave, author of THE GIRL OF INK AND STARS

Ross Montgomery is a former primary school teacher who loves cacti and once fainted in front of the Queen. His first published book was selected as one of The Sunday Times “Top 100 Modern Children’s Classics” and he has been nominated for more awards than we have space to include! Read more about him at http://rossmontgomery.co.uk/

Watch live or catch up here: